The salt spray test, also known as salt fog test, is an accelerated method for testing the corrosion resistance of a galvanized product. The aim of the test is to duplicate the corrosion performance of the product and estimate the life time of the galvanizing coating in a laboratory-based condition. This method has been used for several years by researchers in order to test and develop new metallic and paint coatings, chemical treatments, etc.

Since the salt spray test is a form of accelerated performance analysis, it should be designed and applied in a way that is in correlation with the actual environmental conditions in which the component is used in the real world. However, such correlation has never been fully demonstrated for the spray salt test. Nevertheless, this test has been widely accepted as a reliable method of testing the coating life performance. In fact, several specifications nowadays require the hours-to-failure of the coated products to be tested and determined by salt spray test. Due to several years of performing the test and the data being so readily available and comparable for various types of products, it is impractical to eliminate the salt spray test or find a more relevant substitute for it. The most important advantage of this test is that the results can be obtained in an accelerated, or in other words timely, manner.

The test involves spraying a salt solution of 5% sodium chloride onto the surface of the component, which is placed inside a closed chamber. The solution is sprayed continually in the form of a fine mist or fog while the sample is being rotated frequently, which ensures that the sample surface is under attack uniformly and at all times. The temperature inside the chamber is kept constant during the test. The details of the procedure are provided in ASTM B117 standard Practice for Operating Salt Spray Apparatus. The test duration is typically between 24 to 480 hours; although, longer durations might be necessary in special cases.

The corrosion performance of the sample is monitored and rated in a number of ways, some of which are as follows:

– Number of hours until the rusting of the steel is observed

– Number of hours until 5 % of the surface area is rusted

The appearance of red rust on the steel surface indicates that the protective layer is no longer efficient and the base metal is under attack. The choice of the number of hours as the hours-to-failure depends on the user’s definition of failure. The following guideline gives the expected life time of the hot-dip galvanized steel products based on the galvanizing method used:

An alternative modified ASTM Standard, G85 Standard Practice for Modified Salt Spray Testing, has also been introduced which includes some modifications, such as cyclic acid and SO2 addition. This specification, however, is not as widely used as the ASTM B117. 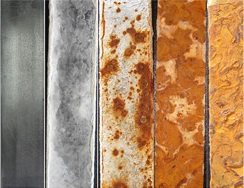 Although the corrosion performance of coatings determined by salt spray test is not comparable to the actual service performance, it can somehow be verified and used by comparing the results to many historical data that have been provided in the literature throughout the years. For instance, the results of salt spray test show a linear behaviour of time-to-first-rust with respect to coating thickness of galvanized steel products. Similar behaviour is observed for the corrosion performance in many types of real world exposures. So even if the test cannot determine the exact number of years that a coating can serve in the real world exposure, it can tell whether the coating thickness meets the requirements or not. For example, only 40 hours of life to 10 % red rust proves that the galvanized product does not meet the thickness requirements for a commercial G60 or G90 coating.

It is to be noted that the salt spray test is a qualitative performance test and if the performance of two samples are compared via the test and the difference in their life expectancies determined, it does not prove that the same quantitative difference would also be observed in real world exposure.

In the salt spray test, like any other corrosion performance test, the samples need to be cleaned and surface contaminants removed before the test is performed. Surface cleaning procedure is determined by the nature of the surface and the type/amount of contaminants present. The cleaned samples should be handled carefully to ensure that the surfaces are not re-contaminated. If the purpose of the test is to examine the corrosion behaviour of the material underneath a layer of paint or non-metallic coating, the surface is first scratched and then tested. Testing a scratched surface also provides useful information regarding the corrosion characteristics of the material in the cases where the coating has been mechanically damaged during real world performance.

According to ASTM Standard D1193, the salt solution is obtained by dissolving 5 % sodium chloride in 95 % of type IV grade of reagent water. The sodium chloride salt should be nickel/copper-free, containing no more than 0.1 % sodium iodide, and a maximum of 3 % of total impurities. The liquid particles should be sprayed at a pressure of 1-25 psi.